Our Senior Team (X standard and below) has met with impressive success in the Republic Day Basketball tournament organised by the Government of Tamil Nadu.

This huge competition, running for three days from 5th to 7th February, was open to all schools in Tamil Nadu including sports colleges. Our team first had to win its way through the zonal competition to qualify to compete at District level. Winning at that level enabled them to go through to the  Division competition and winning that meant they were one of the 16 teams which qualified for the State level competition held in Vellore near Chennai.

In the first round Jayendra played KVS School of Ramanathapuram District and a win by 73 to 33 qualified them for the quarter finals against Coimbatore Sports Hostel. We won this game 82 – 36 and went through to the semi finals where we played PAK School Chennai. Beating them 58 to 48 took us through to the Final.

The Final, against Velammal School was a closely fought match where the lead changed hands several time. Sadly Jayendra lost in the end scoring 60 points to Velammal’s 69.
Nevertheless to reach the Final of a competition of this size and to gain the silver medal is a fantastic achievement. Our Captain Surya and Vice Captain Naresh Kumar did a superb job to lead the team to such heights and all deserve our congratulations. Our best players are amongst the best in the State and therefore in the best few dozen in India.

The team members were each awarded a cup, a certificate and a cheque for Rs 800 by the Government of Tamil Nadu. 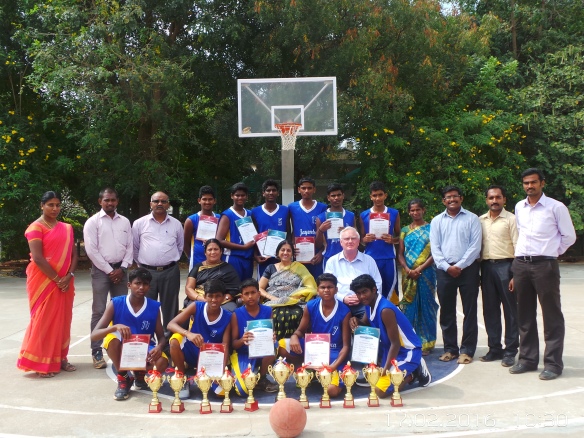