Puranava – is an Indian Heritage Quiz conducted every year by the Global Organisation of Divinity for school students to unveil and make awareness among the budding generations about the wisdom we have in our Puranas, Vedas and Epics for Modern times.  The Grand Finale of this Inter District Heritage Quiz competition for the year 2015 was held on 31st August, 2015 at Nammadwar centre in Tuticorin.

Our students Selvamuthu  Balaji of class 8 and Nada balan of class 7 reached  the top score in the preliminary round conducted on August 3rd at Zonal level and entered the semi finals.

The top scorers of  25 schools from Madurai, Trichy, Virudunagar, Tuticorin, Tirunelveli and Kanyakumari Districts  took part in the Semi finals. Our students performed extremely well in the Semi finals too and retained the first place.

Six teams battled on stage for the Puranava 2015 trophy and the questions were from Tempkles of India, Festivals of India, Mahabaratha, Dasavtharam, Thirupavai , Life of Azhwars, Nayanmars and other saints.

There was excitement and enthusiasm throughout the Finals and the Position of each school varied at the end of each round and it was very difficult to predict the winners of the Grand day. In the last Round our students answered all the questions asked in the Rapid Fire Round correctly and emerged as the Winners of PURANAVA 2015. The organizers appreciated them as the Deserving Winners!!!!!

They were presented with Gold coins, Gift Vouchers and a Prestigious Trophy to the school was also presented. 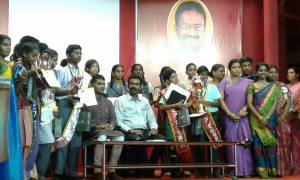