To raise awareness of Diabetes locally, on World Diabetes Day on 16th November the interact club worked with Dr N S Balakrishnan from Sankar Hospital to organize a march. Over two hundred students from XI standard took part. The march was flagged off by Sumit Charan the DIG of Police Tirunelveli. A mobile diabetes camp was also organized using a School bus which toured round Sankarnagar Bazaar. Over 150 patients were tested and advice and, where necessary treatment, given. A number of people who had no idea they were at risk were found to need urgent treatment. This was a very worthwhile exercise. 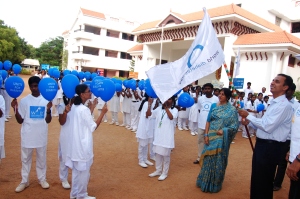