Chennai Super kings and The India Cements Limited Jointly organized and sponsored the Junior Super Kings T20 Tournament for the school students. The tournament witnessed schools from across the state competing for top honours. The event was held in four phases in different places and the Final phase of the Tournament was held in India Cements Limited Ground, Sankar Nagar, Tirunelveli.

Our school Cricket Team Under the captainship of G.Sriram of class 12 executed a stunning performance and reached the Finals. The Final match was played between us and Sankar Higher Secondary School, Sankar Nagar.

After winning the toss, our team elected to bat first and ended with 162 runs for 6. The bowlers of our team with their excellent bowling skill made the opponents to lose all the wickets with 70 runs and Sri Jayendra Cricket Team emerged the winner of Junior Super Kings T 20 tournaments.  Our captain was awarded the Man of the Final title, and S. Amarnath of class 12 received the title of Best Bowler. He reached positive feet by achieving  hat rick in the match against St.John’s Matriculation Higher Secondary School, Kalakkad.

The man behind the success stories of our cricket team is none other than our school P.T.Master and Cricket coach Mr. D.Rajasekaran. The entire team was appreciated and recognized in the school assembly by the Principal and Mr.Paul Bickerdike, London. 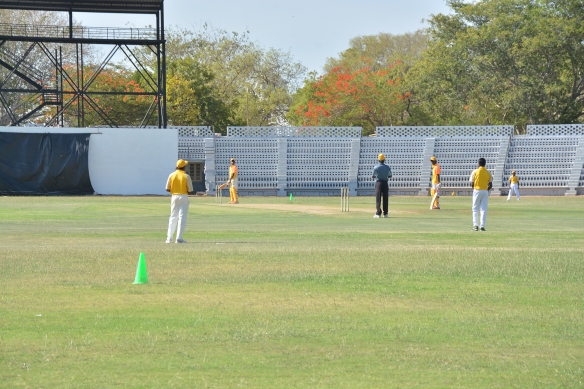