The award recognises the leadership and dedication she has demonstrated in raising  Sri Jayendra School to such great heights and the immense contribution this has made to society.

At a ceremony in Chennai the award was conferred by Ex High Court Judge Mr. Jothimani.

After the ceremony the awardees visited the house of Dr. S.Radhakrishnan the great philosopher and educationalist  who was the second President of India..

Later back at Sri Jayendra the staff and pupils congratulated and felicitated their beloved Principal with a small get-together where all expressed the view that the pupils thrive academically and teachers grow professionally because of her.

Mrs Usha Raman said she felt very honoured and humbled by the award and the praise given to her. 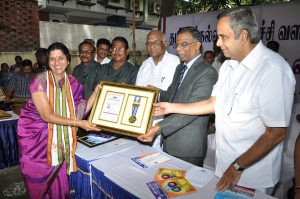