We welcomed many parents who came to support our ‘Kid’s Day’ celebrations in which all the primary school pupils took part. At 9.30 a.m. Mr. William Winfield declared the Sports Day open and all then enjoyed watching as the children participated with great enthusiasm in exciting events like the Running Race, Frog Race, Musical Chairs, Passing the Ball, Water filling, Bead collecting, Skipping, Balloon Bursting and the like. The winners of each competition were proud to be  photographed on the Winning Stand.

The Chief Guest for the evening function was Mr. Mahendran, Superintendent of Police, Tirunelveli. Mr.William Winfield also graced the occasion with his presence.

Santhoshi of V Standard gave the welcome address following which there was a musical performance and a graceful dance on the theme of eye donation. The Kindergarten children  performed a skit on ‘Saving the Environment’ which was the cynosure of the day!  Our Principal Mrs. Usha Raman then gave the Annual Report outlining what has been achieved this year.

Of course the highlight of the evening was the Graduation Ceremony for the children who were  finishing their time in the Kindergarten.

Diplomas were presented to the pupils by our Honorable Guests and the Vote of Thanks was delivered by Arshad of III Standard.

We were proud of the children when we saw how they performed: they were living testimony to the well rounded development Sri Jayendra affords its pupils. 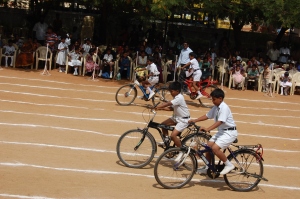